Lucas Papademos is not a disgraced football coach. He isn’t dating a Kardashian. Nor is he starring in the latest Bond movie. Not even a last-minute entry into the race for the GOP’s presidential nomination.

If he were any of those things, of course, you’d be much more likely to recognize the name and face. Lucas Papademos is, in fact, the interim prime minister of Greece. He has been desperately trying to construct an economic recovery out of his nation’s financial collapse.

I care deeply what happens to Greece because, for one thing, I happen to be Greek. I have relatives and friends who are struggling and face the prospect of struggling much more. But I also see no small measure of risk to the world economy if Greece’s economic restructuring, which Papademos has so far led, is allowed to slow, reverse or, God forbid, completely collapse.

Papademos has received the president’s permission to dissolve parliament and hold elections on May 6th. Much – close to everything, perhaps – hangs in the balance for Greece, for Europe, for the world’s economy.

We should all offer Papademos, and Greece itself, our heartfelt blessings. 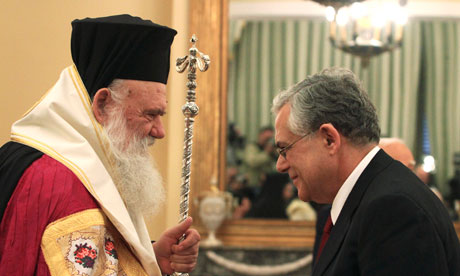 2 thoughts on “Why You Should Care About May 6th”