The sound of The Band, prominently featuring Levon Helm’s vocals, was an extraordinary combination of undeniably important, completely unique and timelessly familiar. When I first heard ‘Music from Big Pink,’ The Band’s first studio album, it felt like the first time I ever heard a reading from The Bible. 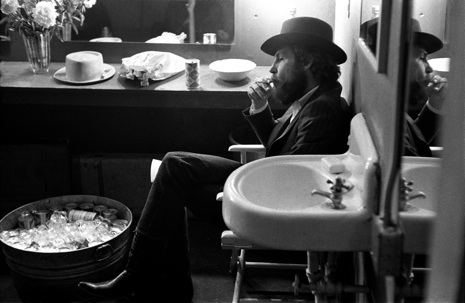 Helm’s voice reflected knowledge, life knowledge, sad knowledge, resigned knowledge, in the same way Frank Sinatra’s did. When Helm sang about unbearable yet inevitable heartbreak, you could hear that he knew of what he sang; it wasn’t pretense or artifice. Especially in his later, post-Band recordings, his voice, then showing the effects of cancer, was chillingly honest, raw, natural. More like, say, Johnny Cash’s later recordings than Frank Sinatra’s.

When I heard that Levon Helm had passed this week, I got a sick feeling in my stomach, like I hadn’t kept up with an old friend who moved to a different city. I just listened to a couple of interviews Terry Gross did with Helm on her NPR show, Fresh Air [click to listen].

As in Levon Helm’s song, ‘When I Go Away,’ (selected lyrics above) life goes on when someone passes away. Doesn’t mean we have to like it.

Eternal peace to you, Levon.