These films bring more than just feel-good stories and swelling music. When you’re ready for a serious look at faith, or want a story about overcoming significant odds, I personally recommend getting your hands on one of these.

The Passion of Joan of Arc (1928): First, it’s silent, so I know that automatically drops it out of consideration for some people; their loss. This film is a masterpiece of the effect of faith on one human being. The face of Maria Falconetti, who plays Joan, is absolutely a window to the soul. Here’s a look at the film’s opening 10 minutes.

The Green Pastures (1936): Almost all Biblical films place the stories somewhere in the MIddle East, using European or European-American actors in drapery-heavy wardrobe. Imagine, if you can, putting the stories of the Bible in the context of rural African Americans, using their social structures, culture, music and vernacular.  This is a powerful and entertaining film that can open a great many possibilities for better understanding stories that seemingly have little to do with our modern lives. Some images may strike some modern viewers as racist – and they do use stereotypes, there’s no denying – but they make Biblical stories more tangible. And the music is wonderful. Here’s a short clip.

The Apostle (1997): I’ve heard it took Robert Duvall 20 years to get this picture made; so worth it. An American slice of life, which is worth watching the movie for all by itself. But you get much more. We’ve all seen films with evangelical preachers as central characters. Typically, they are fakers, con men, in it for a buck. The great strength of ‘The Apostle’ is the idea that a deeply flawed human being, and Duvall’s character is surely that, can have a serious religious faith. This film takes that faith seriously. Duvall and the supporting cast (including a small but critical role for Billy Bob Thornton) are brilliant. Here’s a brief clip.

Amazing Grace (2006): Based on the true story of William Wilberforce, this film shows that adhering to just but unpopular principles can be a difficult and challenging path. After a mid-life conversion to evangelical Christianity, Wilberforce led the British parliament to abolish the lucrative slave trade in 1807 against fierce commercial and political opposition. The cast includes the amazing Youssou N’Dour. See the trailer here.

Witness (1985): Warning: This film is violent, and yet, it may cause you to question your faith in the expediency and effectiveness of violence itself. This hard-nosed police thriller concludes in a very unusual way; at the end of the day, it’s the wholesomeness, neighborliness and values of the Amish community that seduces the Philadelphia cop as much as the comely widow.  Here’s the [over-the-top] trailer.

Dead Man Walking (1995): The story of a nun, Sister Helen Prejean, who became the counselor to a death row inmate and tried to give him some understanding and appreciation of real human love before his execution. Because we know how unlikely it is the sentence of execution will be commuted, we’re forced to find another way for the principle characters to achieve something meaningful in this intensely gripping story. This film is deserving of the many awards it received. Here is one of the film’s many powerful scenes.

Spartacus (1960): Let’s see if this sounds familiar, contemporary…Fight against the world’s superpower to achieve freedom. Think as a revolutionary, even as you experience deep privation. Yourself a slave, organize people with no power, no money, no stake. Taken from the little that’s actually known about the real Greek slave who led a rebellion against Rome. “I am Spartacus!” You damn right. 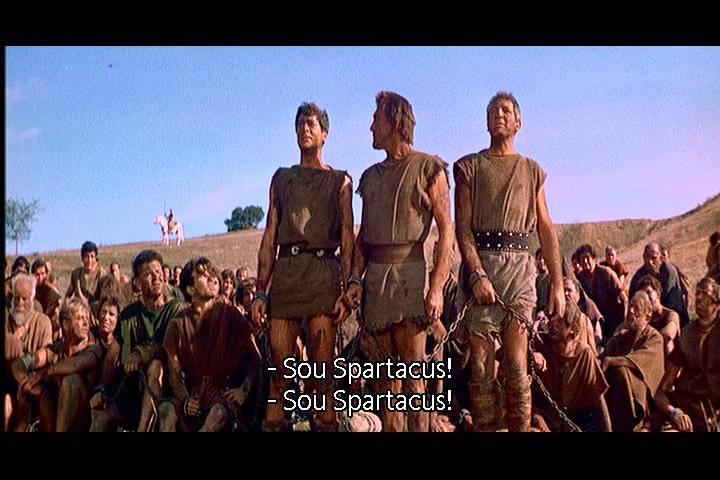 Gandhi (1982): Nonviolence, active nonviolence, can topple empires. Witness the life of Mohandas Gandhi, the preeminent philosophical, political and spiritual leader of the Indian independence movement. This film of grand scope follows Gandhi’s epic life. Here, Oscar-winner Ben Kingsley delivers a stunning speech about his commitment to nonviolence, despite resistance within his movement. “There is no cause for which I am prepared to kill.” 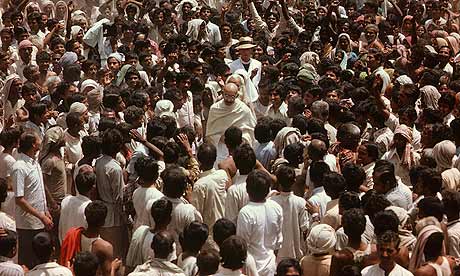 To Kill a Mockingbird (1962): Taken from Harper Lee’s novel, this film shows the Depression-era life of a southern girl as remembered by the woman she has become. Her father, the town’s beloved and respected lawyer, is put in the position of defending an African American man against obviously false charges of rape. The film, in turns savage, warm, funny and frightening, shows the love and growing admiration of a daughter for a father who takes a principled stand against her hometown’s prevailing racism. The lawyer’s closing argument remains a classic.

The Best Years of Our Lives (1946): This film shows the lives of men who have returned home after service in World War 2 – how they’ve changed, the scars they return with, how deep the divisions are between them (and those they served with) and the people who stayed at home, and how they put their lives back together. Extraordinarily, it was made the year after the war ended – as America was actually dealing with the return of its servicemen – with actors who’d actually been in combat. One member of the cast, Harold Russell, had lost both hands in the war, adding a poignant reality to the film. Here, Russell comes home but is too self-conscious of his hooks to hug his girlfriend when she runs out to meet him. War, this film reminds us, leaves scars.

4 thoughts on “Films of Faith and Inspiration”