What do we know about dogs and the way they communicate with human beings?

Scientific American concludes they don’t, at least not really.

Numerous times in fiction, especially in films, dogs can give voice to very complex ideas.

In his wildly popular comic, The Far Side, artist and lunatic Gary Larson hypothesized a very low level of canine understanding (or is it interest in?) of our spoken commands, much less ability to respond verbally. 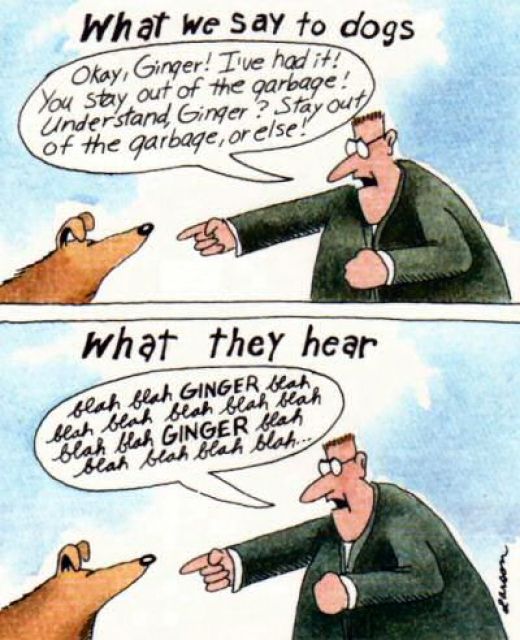 But human propensity to dress dogs up, babble at them endlessly, and make them into little playthings leads me to conclude that we humans believe dogs can indeed understand, if not communicate in response. Given my long experience living closely in the familiar company of “man’s best friend,” I have come to believe that (1) dogs do talk, but (2) they don’t speak all languages equally well.

There’s a professional dog walker I’ve observed speaking to his pack in a sort of pidgin Gaelic; and they never listen to him. He’s constantly repeating commands again and again, to no apparent result.

On the other hand, here’s my dog, DeeDee.

I speak to DeeDee, most often in English, but sometimes in Greek and every so often in French. Why? Just to see if she notices any difference and, probably most of all, just because I find it funny.
Does she respond any differently to “Let’s go!” than she would to, say, “Allez!”? (Or should that properly be “Allons!”?) Not that I’ve noticed. She also responds to French and English, and only sometimes Greek, in a soft verbal response that is not barking. I would classify this as speaking.
Therefore, from my scientific – albeit not exhaustive – study, I can conclude that DeeDee’s understanding of French is equal her understanding of English.
What can we conclude? Dogs understand English and French, and some Greek, but not Gaelic.

2 thoughts on “My Dog Speaks French”