The morning didn’t start auspiciously. Another driver, distracted by a brilliantly beautiful person running down Dolores, turned in front of me with neither look nor signal. I swerved to avoid him but nearly took out a streetsign to do it. When I’m behind the wheel, my spouse calls me Mario (after racing legend Mario Andretti) for a reason.

Disaster averted, I took my canine pal, DeeDee, to Fort Funston, built in the late 1930s as an artillery battery to protect San Francisco Bay from Japanese invasion, now a dog park and hang glider takeoff spot. It’s one of the few safe places the city’s dog owners can let their dogs run offleash and free, and a wonderful place to enjoy spectacular views of the Pacific Ocean. [Great ocean views were once critical, I understand, for artillery batteries.] 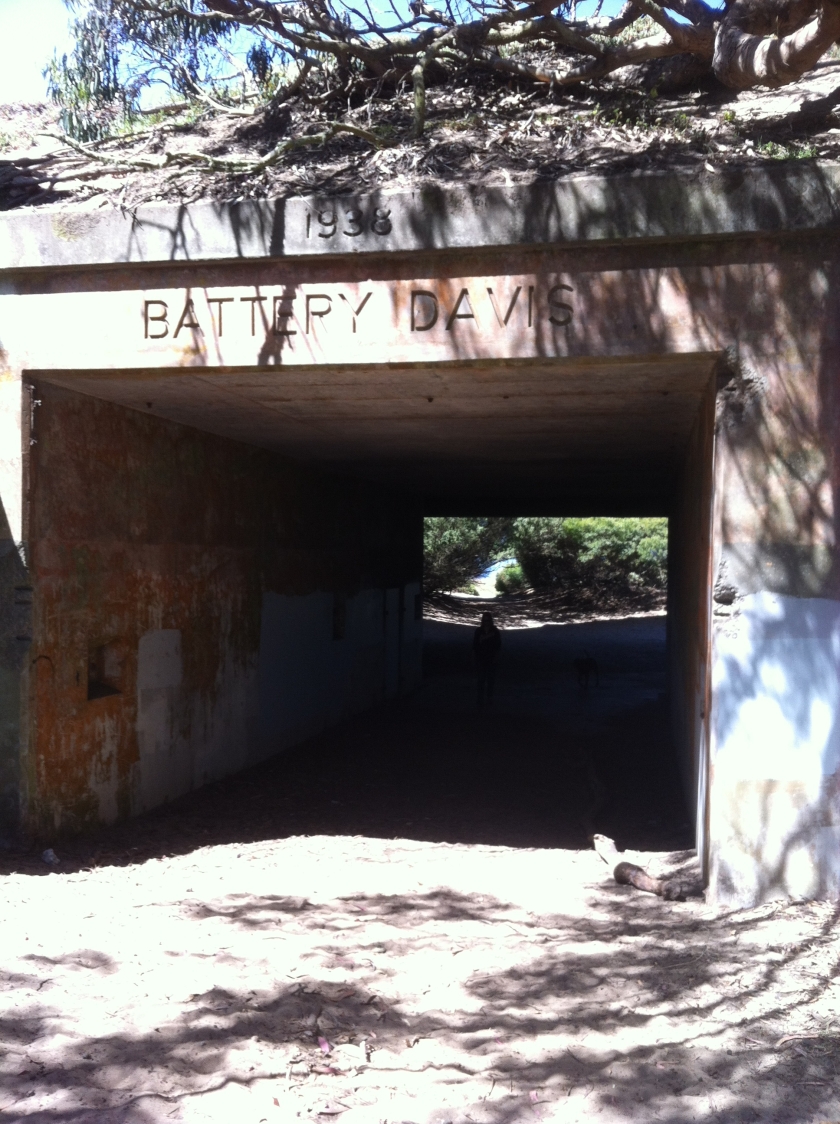 Not a cloud in the sky, the sun was warm, the breeze off the Pacific refreshing. A glorious first day of summer, the so-called longest day of the year in the Northern Hemisphere. 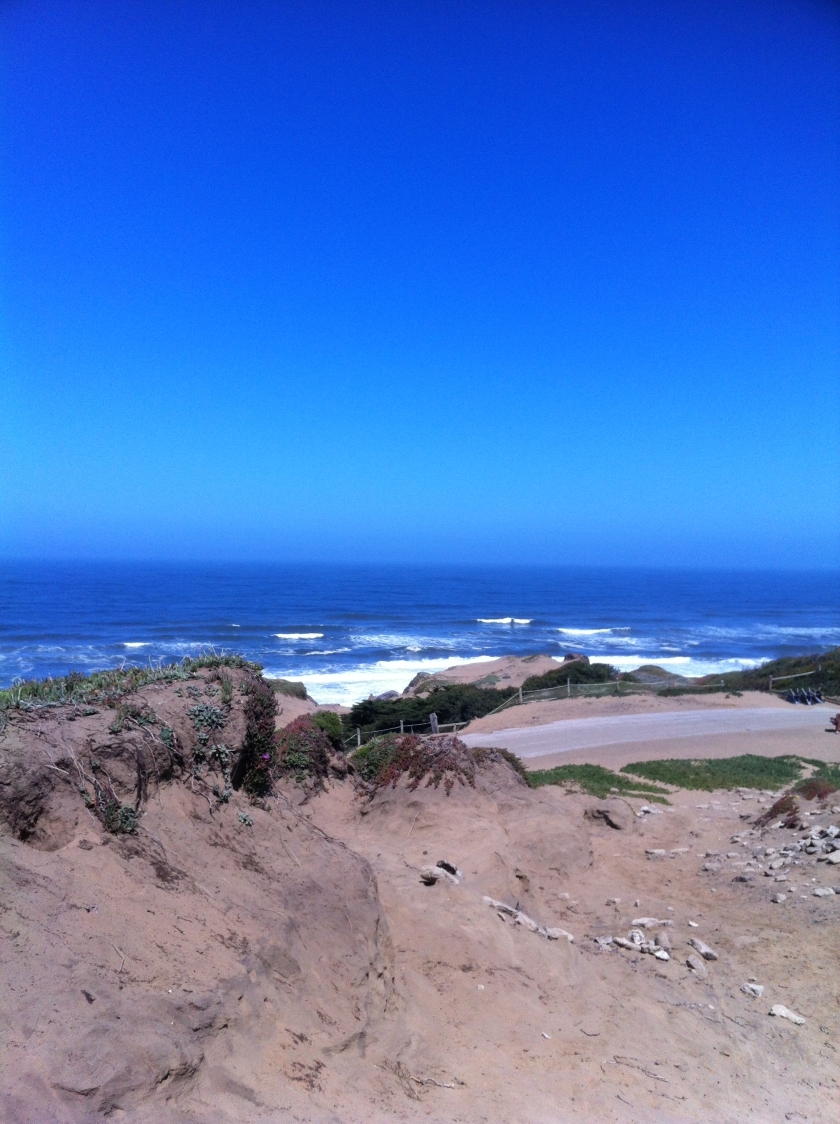 We, my spouse and I, once visited the Orkneys, islands north of Scotland, during the summer. Even after midnight, it never got truly dark. As I waxed poetic about the islands’ stunning beauty, a native reminded me that, 6 months from then, in the dead of winter, it would never be truly light; the sun doesn’t really rise, the place stays in perpetual twilight.

Yeah, thanks anyway. I believe I’ll just stay right where I am, closer to the Equator. 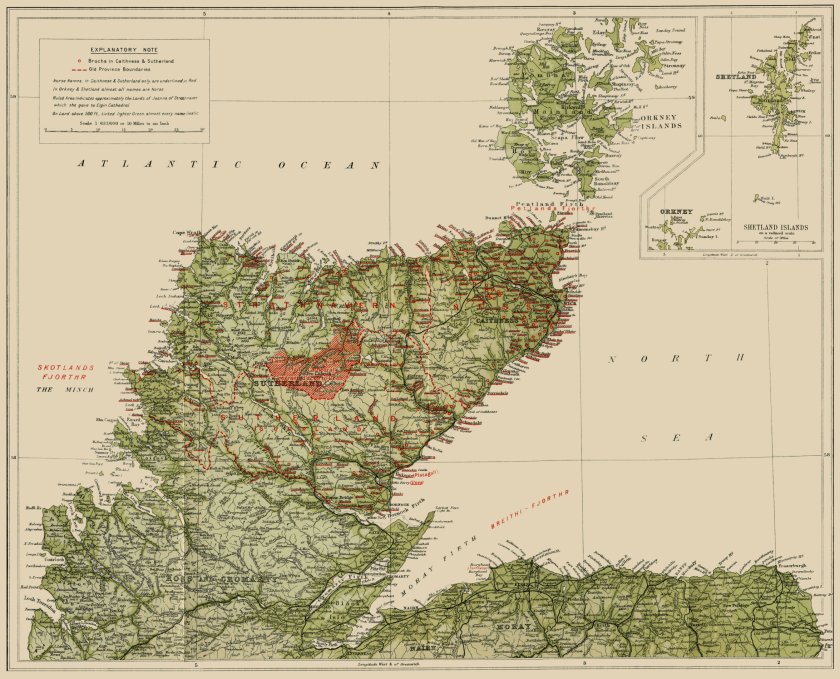 Go to the very northernmost tip of Scotland, to the town of John O’Groats. Get onto the ferry going north. Head across the North Sea. (Prepare for a rough crossing. On our trip, the rails and bathrooms were filled beyond capacity with sickened travelers.) 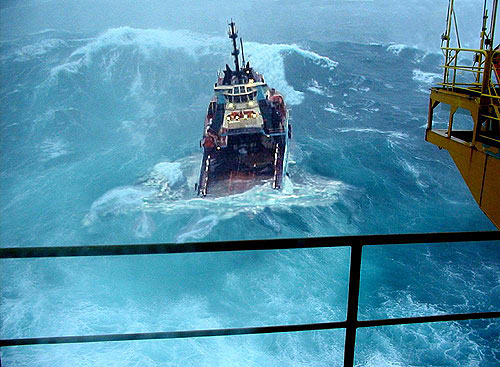 After losing sight of the Scottish mainland, you’ll soon be surrounded by water, the churning, freezing, foamy waters of the North Sea. Bobbing seabirds. Small, rocky, impossibly carved rock islands. This (below) is called The Old Man of Hoy; he wasn’t bathed in warm sunshine when we saw him, I can assure you. 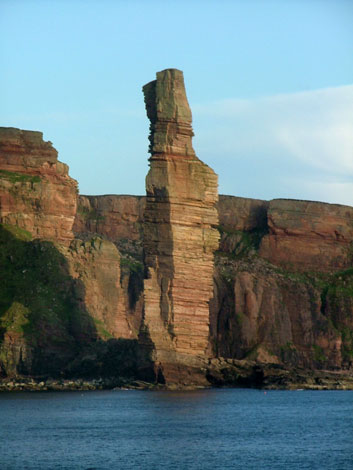 After several hours, the ferry will turn, and sail on the protected side of a land mass. The wind will mellow and the ship will slip into a movie-set harbor of waterside pubs and little houses clinging to the land’s end. Looks just as charming in real life as this photo would suggest. 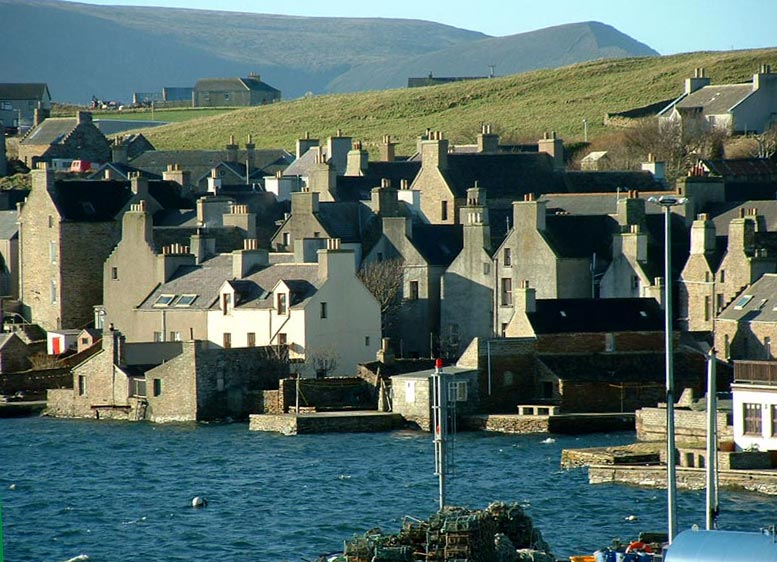 And then, you’re home.

The Orkneys, a string of islands that’s a part of Scotland, is home to a 12th century cathedral, ruins of a stone age village, Scotland’s Stonehenge, an Italian-built chapel and at least one great distillery.

St. Magnus Cathedral, begun in the year 1137, dominates the town center of Kirkwall. It shows the influence of both Celts and Scandinavians, both of whom lived in the islands over the course of their history. 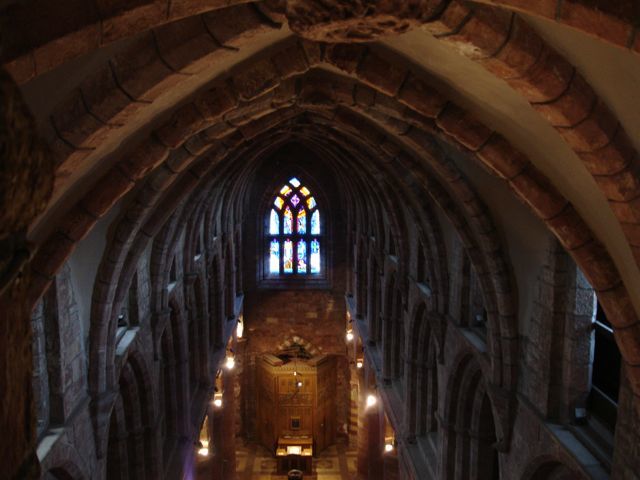 It is breathtakingly beautiful but there is a deliberate feeling of darkness and death. Tombs are prominent… 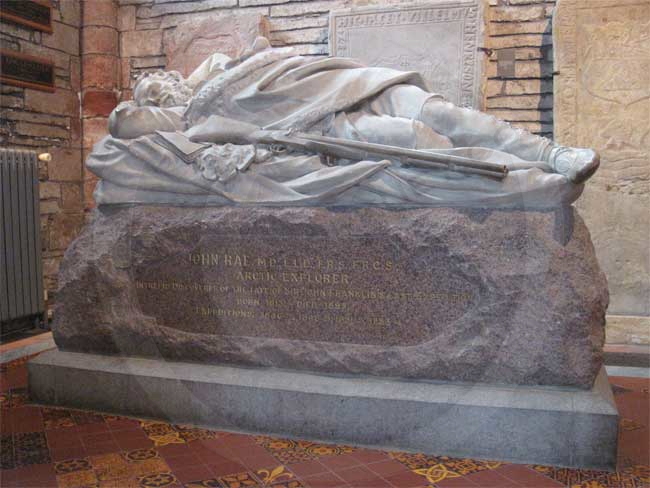 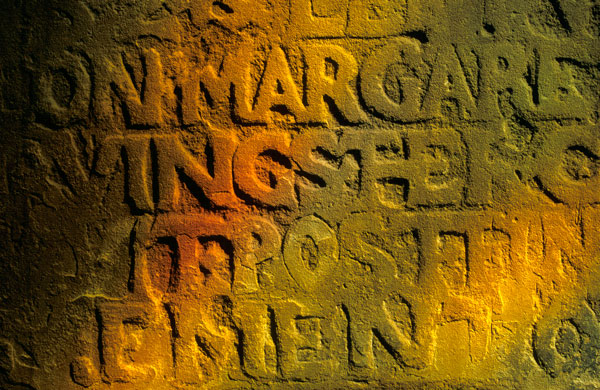 …as are other reminders of visitors’ mortality. This plaque (below) says “Memento Mori,” remember that you are mortal. As if one could forget it for a moment in this setting. 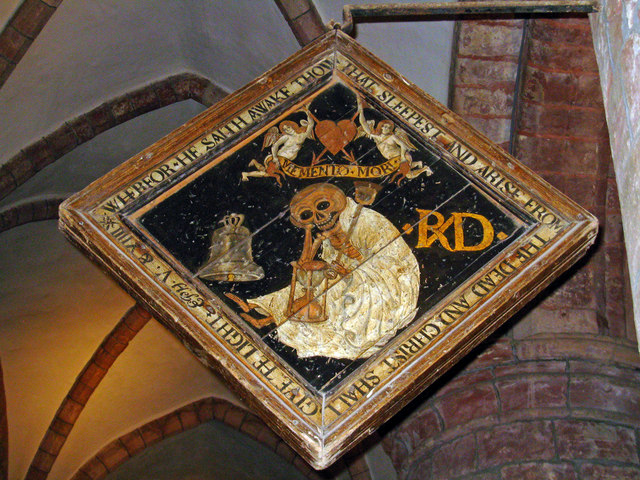 The natural setting of the islands is extraordinary. You can easily get vertigo by imagining you’re at the end of the earth (which isn’t too far from the truth), at least I could. 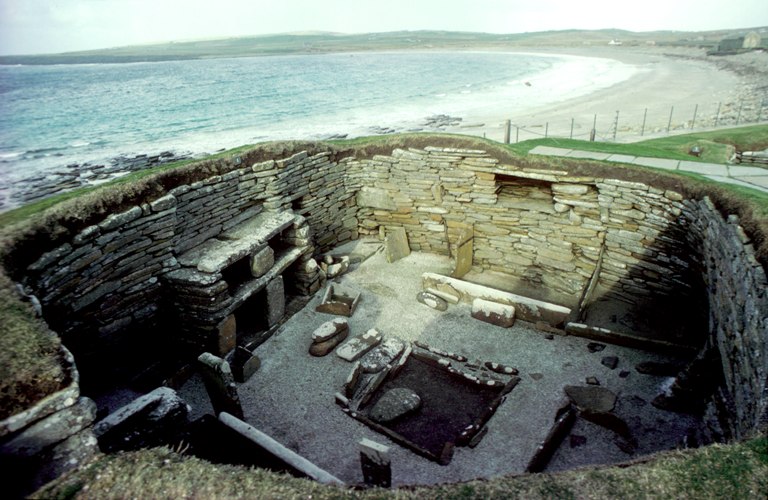 The Ring of Brodgar, constructed about 4000 years ago, has been little studied and even less well understood. The individual stones are huge, by the way. 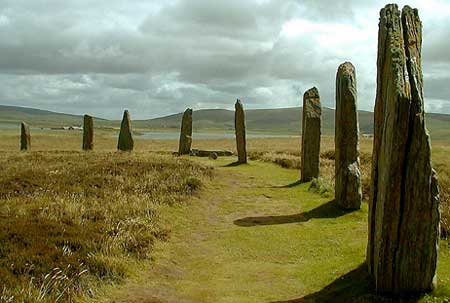 During the Second World War, Italian prisoners of war who were kept on the islands used a quonset hut and built a Roman Catholic chapel that still draws visitors for its incongruous exterior and interior painting. 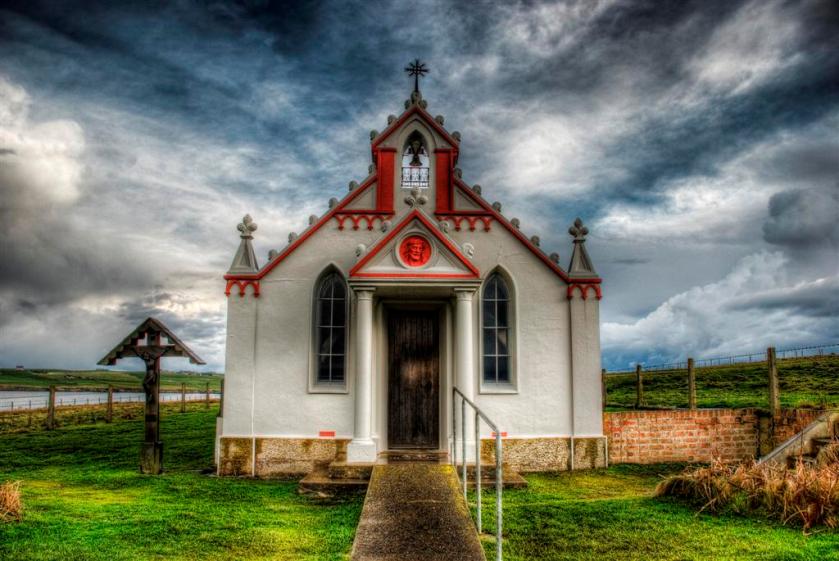 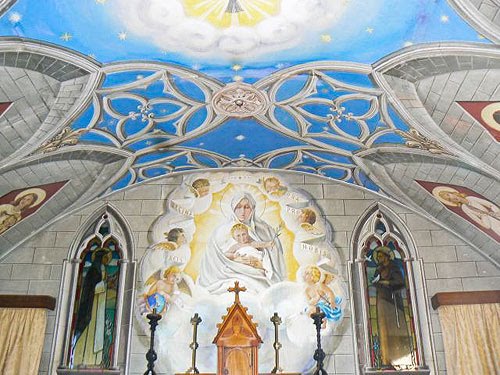 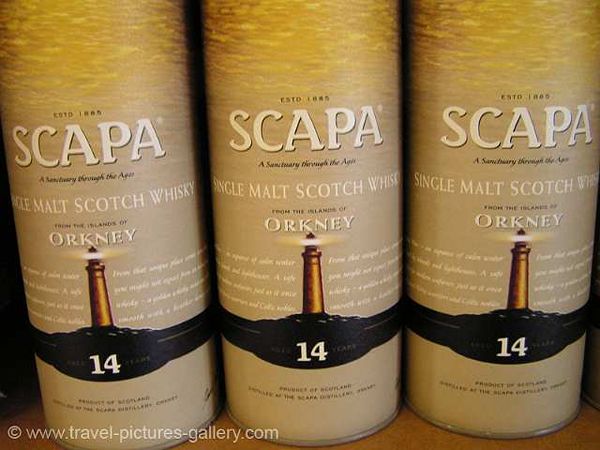 My advice? Buy several bottles, to gird your loins for the ferry trip back.