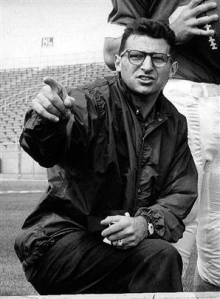 [Self-disclosure: I have worked on several sexual abuse cases as a public relations and communications professional.]

Following his death after a long battle with lung cancer, many questions have been raised about the life and lasting legacy of long-time Penn State University football coach, Joe Paterno.

My friend, the Philadelphia Inquirer’s John Timpane, wrote today about social media and reactions to Joe Paterno’s death. Slate’s Torrie Bosch wondered if it was even appropriate to mourn the death of Joe Paterno.

Joe Paterno was a man, a human being. He had all the flaws, the mixture of positive and negative characteristics the term “human” suggests. Among coaches of big-time college football programs, he was known to care deeply about the welfare of his players, as people and students, in addition to athletes. This set him apart from the majority of his peers, who have obviously come to care more deeply about wins, losses and revenues than school, who tend to think of their programs as little more than college-sponsored pre-professional athletic camps. To many observers of college athletics, the Ivy-educated Paterno was always one of the “good guys.”

How does this image square with the coach’s indifference, or worse, about allegations of his former colleague’s sexual abuse of children?

In all my experience with sexual abuse, and it has been more than plenty, the human reaction I have seen, for the most part, is not active engagement but denial. People will tell themselves all manner of tortured narrative to avoid seeing evidence of abuse that stares them directly in the face. It’s only after the fact that people turn themselves into steel-eyed, bare-knuckled avengers – asserting their courage and forthrightness:

Some form of that is what a great many people said when they heard about what Joe Paterno did (or didn’t do) when informed of allegations about his former assistant Jerry Sandusky.

These people may, indeed, have acted that way when faced with an allegation of sexual abuse aimed at an old friend and colleague, but it has not been my personal experience of people’s behavior in the actual moment. My direct experience tells me most people, if faced with the same situation, would have:

Since that’s what my experience suggests to me, I’m inclined to accept as plausible both the Joe Paterno who didn’t push the allegations of his former assistant’s sexual abuse as vigorously as he should have, and the Joe Paterno who seemed to care for his charges like the benevolent grandfather his players and former players describe.

And, today, I believe it is right and proper to mourn that human being.