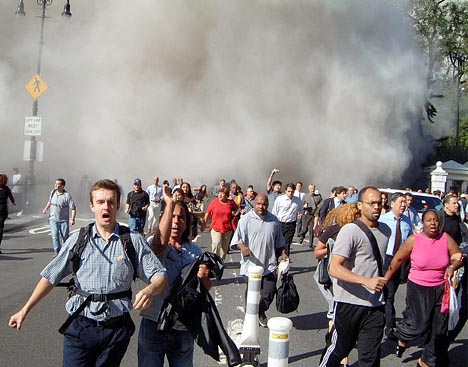 As luck would have it, I was starting a new position as the leader of a nonprofit on September 11, 2001. I got up early that morning and was, more or less, absorbed with the triviality of putting together just the right thing to wear.  Nothing too corporate, I remember thinking.

That great task satisfied, I walked the two blocks from my house to the subway station, where I was met with larger-than-usual crowds. Perfect, I thought, first day and I’m going to be late because of San Francisco’s perpetually bad mass transit system. I ran into a neighbor who said, “God, can you believe it?” Thinking she was referring to the mass of humanity waiting on the subway platform for the next train, I simply nodded in agreement.

“I know,” I said, “the city can’t even get a simple train system right.”

“What?” my neighbor replied. “What are you talking about? Haven’t you heard? Don’t you know what’s going on?”

“They’re attacking us. They flew planes into the Pentagon and the World Trade Center.”

I’d always considered my neighbor to be the type with her feet firmly on the ground, but at this moment, I sincerely thought her mad. She talked, manically, at me for the entire ride downtown. And, little by little, I came to realize that she was, more or less, telling me a story that was the truth, as hard as it was to wrap my head around.

When our train arrived downtown, I tried to climb the stairs to street level, but hundreds – perhaps thousands – of people were streaming back into the station from above. It was a completely disorienting moment.

It wasn’t until I reached my new office and turned on the radio that I slowly began to understand what had happened in New York and Washington and in that Pennsylvania field that morning.

My parents’ generation had experienced the feeling before, after the Japanese surprise attack on Pearl Harbor. Their calm, quiet world had been shattered, “like a fire bell in the night.” But people my age had never experienced anything remotely like it.

We, of course, were very lucky. We had no collapsing buildings, no debris, no choking dust, no dead where I was, in San Francisco. And despite the endless hours of TV I watched that night and in the weeks that followed, when I think back to that date, it is my own disbelief and disorientation I remember most vividly.