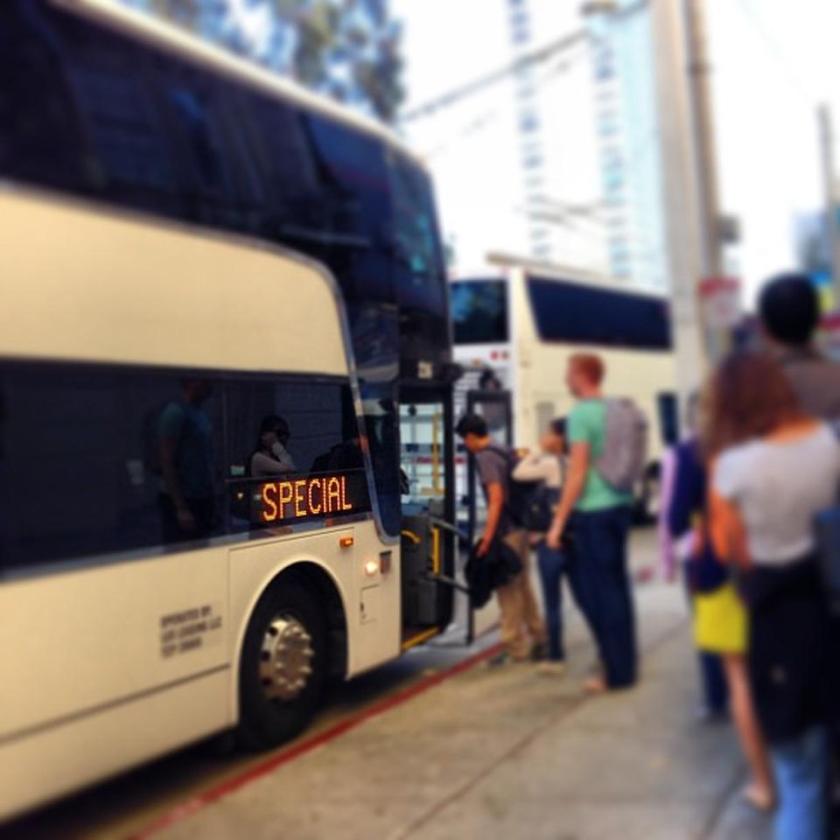 As is standard operating procedure for this burg, what can at first look like small things get perceived and communicated about in epochal ways.

Latest example: luxe private buses that whisk high-tech employees from their homes in San Francisco to their Silicon (née Santa Clara) Valley corporate headquarters have incited world-class neighborhood ire. Many of the city’s most-affected residents say these companies are using public infrastructure (e.g., public bus stops, city streets, etc.) without compensating public budgets. Further, they suggest, by running their own private transit systems and simultaneously campaigning against higher taxes and public expenditure on infrastructure, they are starving the very systems ‘regular’ San Franciscans have no choice but to use in getting to their places of work, schools, shopping, entertainment and other necessities.

As a consequence, a war of words, sometimes nasty words, has ensued.

‘Techies’, as high-tech workers are sometimes derisively called, are accused of being everything from social Darwinists to fascists to elitists. Neighborhood activists are called luddites, socialists, envious of high-tech workers’ incomes and job perquisites. Some words, obviously, have more truth to them than others but the back-and-forth has done nothing to illuminate the deeper and, therefore, real issues or to resolve the conflict.

So, let me add a few hopefully helpful words here. I start with a bit of background.

San Francisco is my hometown. I say that because I was born and raised here and have spent the vast majority of my 50-plus years here. I went to San Francisco public schools from kindergarten through high school. I had a large high school graduating class (almost 1,000) and I still run into classmates around town. Today, they’re cops and actors and firefighters and bus drivers and doctors and steelworkers and lawyers and skilled craftspeople. My parents were also both born and raised here and, in fact, spent their entire lives here (excepting breaks for war and college). My grandfather Vasilios was a neighborhood grocer, going back to the 1920s. My grandmother Zafero was a seamstress. They had a flat in the Mission, where my mom and uncle were raised. My grandfather Mitchell was a merchant seaman and saw the horrible events of Bloody Thursday – a waterfront labor riot in 1934 – with his own eyes. They and people of their generations built today’s modern (post-1906 earthquake) San Francisco.

There are a great many San Franciscans who are proud of their hometown, some of whom have lived here a long time and also worked hard to build the city that exists here today. Sad fact: some of them can’t afford to live here anymore.

Back in the 1990s, during an earlier wave of tech expansion in San Francisco, highly-paid people flocked to neighborhoods like the Mission and brought with them some positive things (e.g., chic and trendy places to eat) and some negative (e.g., much higher home prices and rents). Many long-time residents had to leave because it was too expensive to stay. The place changed and then, soon after, the tech bubble burst. Many of the 90s-era ‘techies’ and their most-favored eateries simply moved elsewhere but the continuity of the neighborhood was destroyed. There was no taking that back. So, families that had loved living in the Mission for generations were gone, many for good. Many long-time residents would say, “We got kicked out for nothing.” Their Mission changed to serve no lasting or positive purpose.

Population turnover and change can be healthy for a city. And, God knows, San Francisco can be root-bound in trying to preserve tradition. But I’ve seen time and again the value of having people stay around for the long haul. You probably don’t remember how graciously and hospitably and charitably neighbors treated each other after the 1989 earthquake but I do. We made it through some tough times by leaning on each other. People who are in and out with every one of the latest fads don’t get that kind of support, and don’t tend to give it either. Our city would be immeasurably poorer as a place if the composition of our population were completely dependent on temporary vagaries of the economy. (Anybody really want to base our shared identity and welfare as San Franciscans on the probability of, for example, Zynga’s long-term success? Yeah, didn’t think so.)

Now, another wave of well-heeled tech hipsters has discovered the joys of living in San Francisco. And they’ve re-made a number of old family-oriented neighborhoods in their own images. Bernal Heights is now the ‘hottest’ neighborhood in the country according to one recent magazine poll (San Francisco is also, no coincidence, the third least-affordable city in the world.).  Who can blame them for loving life in this city? Certainly not me. You have money earned from your hard work. Good for you. Enjoy. Spend it well. Live. Eat.

But I ask my newest fellow San Franciscans to understand some measure of the anger directed at them. When you see people yelling at your luxury buses, remember that these people are taking public transit. Filthy. Crowded. Undependable. No (gasp) Wi-Fi. It’s not that they wouldn’t like to share your plush ride. It’s that they can’t, and probably never will. And it’s that they know, sooner or later, living in their hometown is likely to get too expensive for them. And they’ll have to say goodbye to a neighborhood and a city they’ve loved being a part of for a long time. And they’re angry at that. And they’re angry at you, as you blithely skip down Cortland Avenue, drip-brewed artisan coffee in hand, talking loudly about your latest plan for world conquest into your Bluetooth and step onto your private chariot for the drive to Mountain View or Redwood Shores or Cupertino or wherever you’re going.

[And when your business goes south, as it may one day do, chances are you’ll be off to the next latest hot neighborhood in Austin or Brooklyn or Raleigh-Durham or Dubai, leaving behind only sad people and empty spaces.]

Don’t worry about the neighborhood people, though; their shitty old MUNI should be along any time now. 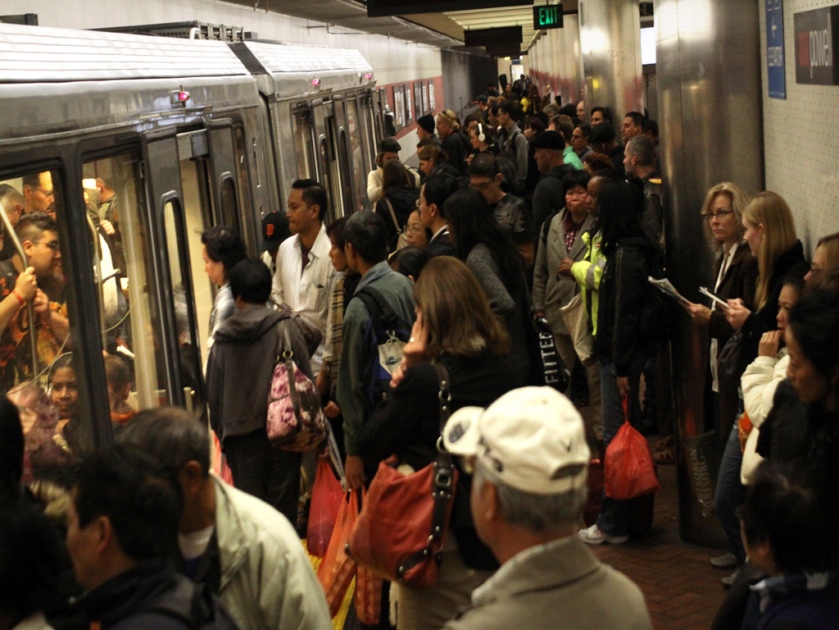